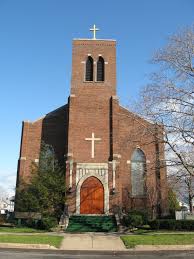 St. Peter’s had its origin in a nucleus to a mission held at St. Mary’s Church in 1856.  In 1859 the Franciscan Fathers of  Syracuse held a retreat at St. Mary’s Church, and on September 16, 1860, the St. Boniface Society was organized for the purpose of raising funds for the erection of a church for the German speaking Catholic people.  A lot was purchased at the corner of East Seventh and Albany Streets and a frame structure was erected in 1863  The Franciscan Fathers remained in charge until 1864.  The rector at the present time is Rev. George S. Heisler, a native of Oswego and an able priest.