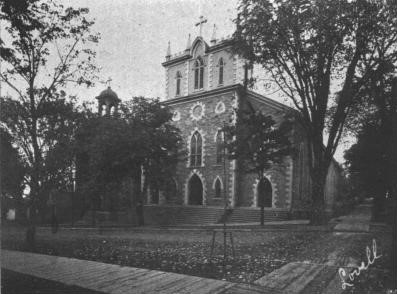 St. Paul’s Roman Catholic Church was organized in 1830.  Peter Lappin and twenty others, the only Catholic residents at that time in Oswego, invited Rev. Father O’Donohue, whose pastorate embraced all the villages in Central New York, to hold services here.  The first mass was celebrated in a private house.  Shortly after this a lot at the corner of East Fifth and Mohawk Streets was purchased and a small frame building was erected.  This was not large enough to meet the needs of the growing Catholic population and in a short time an addition to the little church was made.  Even this became too small and in 1840 the corner stone of a substantial stone edifice was laid.  The church erected at that time lasted for over thirty years and in  1871 it was razed and the  present structure, one of the largest church buildings in this part of the State, erected on  the  old site.  The  work  was  begun  and  completed under the direction of the present rector, Very Rev. Dean Barry, who came to St. Paul’s in 1869.  Attached to the church is the parochial school which is attended by over 400 children of the congregation.  The school is a monument to the zeal of Dean Barry for the cause of Christian education.  The organ installed in the church by Father Barry is the largest and finest instrument of its kind in the world.  Recent improvements have added to the volume and tone of the organ and it is the admiration of the eminent organists who have at one time or another brought out its rich, majestic qualities.  The congregation of the church is the largest religious organization in the city and St. Paul’s, through the tireless energy of its pastor, is the center of Catholic worship in Oswego.  Father Richard Shanahan, recently appointed, is the curate.